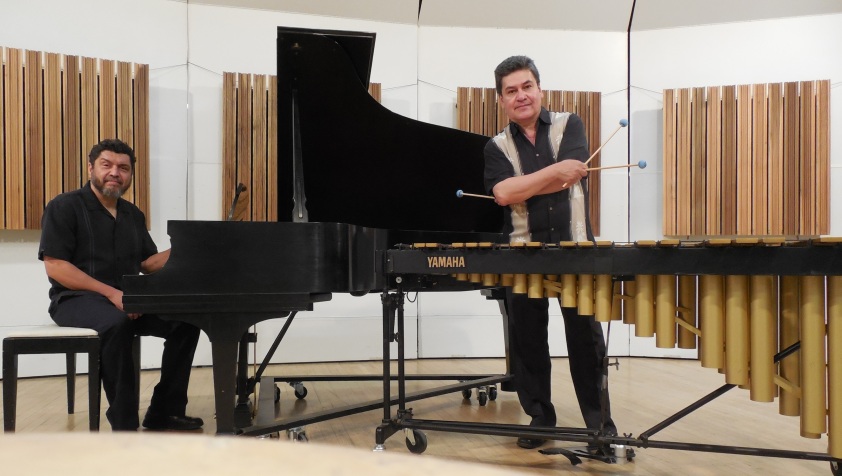 St. Philip’s In The Hills Friends of Music presents the third of four concerts of their popular Summer Sizzler Series. On Sunday, August 21, 2016, at 2:00 p.m. in the Church, Tucson Latin Jazz Nonet will perform Afro-Cuban-Caribbean flavored jazz, with music mostly by Bill Cunliffe, Oscar Hernannez, Eddie Palmieri, and Amilcar Guevara.

In the early 1990s, the Tucson Jazz Society sponsored its own Tucson Latin Jazz Orchestra, which was quite successful for a few years. However, the size of the group and the departure of Luis Torres in 1997 made the continuation of the orchestra difficult. In 2014, Amilcar Guevara and Homero Cerón thought of starting a group that would have some of the same elements of the former Tucson Latin Jazz Orchestra but with fewer players, hence the birth of the Tucson Latin Jazz Nonet. The group does mainly Afro-Cuban music with a few Puerto Rican and Southeastern Mexican influenced numbers. It is all-instrumental, and improvised solos are a main staple.

St. Philip’s is located at 4440 N. Campbell Avenue at River Road. Ample parking is available in the north parking lot or under our solar parking structure on the east side. For more information click here or call (520) 222-7277.

Additional Information:
Homero Cerón, concert percussionist. Based in Tucson, Homero has lived a diverse life as a percussionist. Starting in the music business as a 12 year old drummer in Monterrey, Mexico, he went on to study music in Milwaukee, Wisconsin in the mid 70s followed by graduate work at the University of Arizona. He has played: drums/vibes/timpani and orchestral percussion in many different settings — from small jazz combos to symphony orchestras, ballet, opera, and in the orchestra pit of numerous touring shows. He has appeared as a soloist on marimba/vibraphone and percussion with various chamber groups including the Tucson Symphony and Tucson Pops Orchestras. Homero presently is the Principal Percussionist of the Tucson Symphony Orchestra and freelances as a marimba, vibraphone, and steel drum soloist as well as small groups in jazz and chamber music. He is also is co-director of the Tucson Latin Jazz Nonet, an ensemble that specializes in Afro-Cuban jazz.

Amilcar Guevara, pianist, arranger, composer, and producer, was born in Central America (El Salvador) into a family with a musical background based in traditional Latin music. After many years of learning, playing and experimenting with all different kinds of music, he has developed a versatile approach to his playing and his composition. In recent years he has been living in Tucson, Arizona and has worked as musical director of “Salsa” and “Charanga” bands — “Charanga” being a traditional Cuban style of music and dance. He also continues to pursue his interest in Latin jazz with his own Quartet. He has completed a recording, Tan Cerca, Tan Lejos (So Close, Yet So Far), which combines all the elements of his musical background and experience into a fusion of jazz with Brazilian and Caribbean rhythms. The arranging, performing, and producing talents he developed while working for recording studios in Guatemala have been applied to recording projects he has recently completed. These include a CD for the Tucson Latin Jazz Orchestra, the music for an instructional video of Latin dance aerobics, and CDs for individual performing artists in Tucson and Albuquerque.