St. Philip’s Friends of Music presents noontime recitals during Lent on Thursdays at 12:15 p.m. beginning February 11, 2016 in the Bloom Music Center. Entitled Rising Stars in the Next Musical Generation, young high achievers in the Tucson area will dazzle with their professional polish, maturity and technical prowess. St. Philip’s Friends of Music proudly showcases the newest generation of musicians. Listen to them as they ascend to the professional stage — an entertaining and relaxing way to spend your lunch hour. 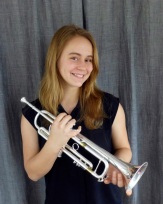 The series begins on Thursday, February 11 with Sound the Trumpet: Miranda Agnew, trumpet. A participant in the Arizona All State Concert Band for the past two years, Miranda is a member of the Tucson Jazz Institute’s award-winning Ellington Band, selected for the Essentially Ellington competition in New York City in 2015 where she received special honors. In this concert of contemporary classical music, Miranda will play works by Stevens, Arutunian and Tchaikovsky.

On Thursday, February 18, Guitar Masterpieces: Grace Sheppard, guitar. With international competition acclaim and her own YouTube channel, Grace Sheppard is unsurpassed as an “under 18” soloist and chamber music ensemble performer for guitars and harp. Grace’s program includes works from Rodrigo, Brouwer and Barrios.

On Thursday, March 3, Voice of the Violin: Carissa Powe, violin. Hailed by the Arizona Daily Star for her “warm, rich tone,” at age 16 Carissa Powe is a rising talent not to be missed. Current concertmistress of the Tucson Philharmonia Youth Orchestra, Carissa takes top prizes in local competitions and has been showcased in performances with several regional orchestras, including the Tucson Symphony Orchestra.

The series concludes on Thursday, March 17 with Glissando! Claire Thai, harp. Internationally recognized harpist Claire Thai fell in love with the harp when she was 2, began lessons at age 5 and never looked back. She has won acclaim locally, nationally and internationally through competitions as one of the most accomplished high school harpists in the U.S.A. She will delight us with virtuosity and her personal musical portrayals of harp repertoire gems.

St. Philip’s is located at 4440 N. Campbell Avenue at River Road. Ample parking is available in the north parking lot. All concerts are held in the Bloom Music Center which is just south down the breezeway from the north parking lot. Suggested admission is $10 to St. Philip’s Friends of Music. Friends of Music provides support to the music program at St. Philip’s, through sponsoring concerts, special musical events, commissions, scholarships, and community outreach programs. For more information click here or call (520) 222-7277.